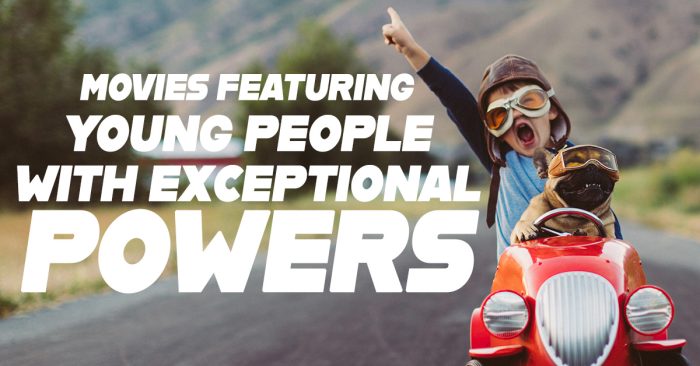 This 1975 Disney movie features orphan siblings Tony and Tia, who have exceptional powers that have drawn the attention of an evil millionaire. Tony, using his harmonica, has the ability to make physical objects move. Tia can get glimpses into the future and can communicate with Tony telepathically. Both get glimpses of a past accident in the water that separated them from their families. Along the way, grumpy Eddie Albert, who dislikes children, agrees to help them find their way to family using a map found in Tia’s starcase, while being chased by the millionaire. This family-friendly film has special effects so crude as to be comical by today’s standards.

This not-so family-friendly film stars a 12-year-old Linda Blair whose special powers come from the devil himself. They include the ability to rotate her head on her neck, float above her bed and to cuss like a sailor. A priest comes to do battle for the soul of the possessed girl. The special effects were so shocking and the language and content so foul as to create widespread controversy upon its release.

When little Charley gets mad, she really gets fired up. Charley, played by a young Drew Barrymore has inherited hydrokinetic abilities to start fires telepathically. Let’s just say she’s not always successful at controlling the anger that sparks such abilities. This film is worth seeking out if only for its many notable stars. Beyond Barrymore the movie features Heather Locklear, George C. Scott, David Keith, Freddie Jones, Art Carney and Martin Sheen. It was released in 1984.

Cute, brilliant and generally well-mannered little Matilda is unfortunate enough to have self-centered, uncaring and uneducated parents played by Danny DeVito and Rhea Perlman. After self-educating at a library, she begins to discover her special powers. Matilda finally gets a chance to go to school where the mean head mistress, Miss Trunchbull, awaits. Luckily, so does Miss Honey, a kind-hearted, caring teacher. This film is a classic that has a bit of everything.

Perhaps no film has had children with special powers that has had such an impact as the Harry Potter series of movies. Special powers, which are almost unlimited, are honed at Hogwarts. The first film in the series recently celebrated its 20th anniversary. It seems both brooms and time fly.

You don’t need special powers to save on your auto, home, business or life insurance. Just contact one of our independent insurance agents for a free insurance review and price quote. It is almost magic!