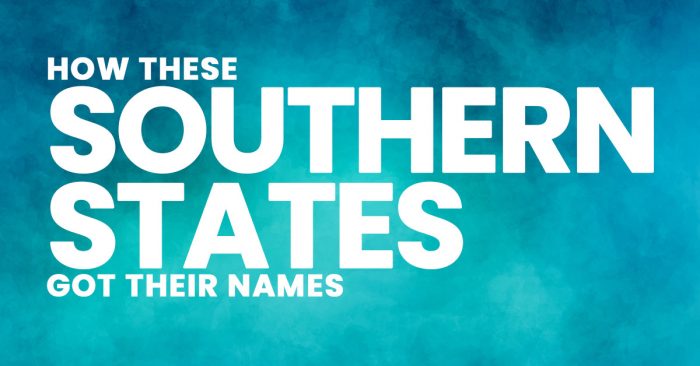 If you’ve been curious enough in your life, you may know how the state you were born in or currently live in was named. But what about the other states you may have traveled to or even just heard about? For those that may have missed that day in geography or history class, here is why some Southern states have been named.

Florida
The honor of naming Florida was given to European explorer Ponce de Leon, who first came to the area in 1513. He named it after the Spanish Easter celebration “Pascua Florida” or “Feast of Flowers”. It seems Ponce was not only the original “Florida Man” but was the first in a long line of spring breakers.

Alabama
The name Alabama is said to come from two Choctaw Indian words Alba and Amo. Together the words mean “gatherer or picker of herbs and vegetation.” Today they would probably combine the names Bear Bryant and Nick Saban.

Georgia
Many don’t know that Georgia is the southernmost of the initial 13 colonies. Named after King George II of Great Britain, the original colony was much larger, spanning from Spanish Florida to West Louisiana at the Mississippi River. Of course, there were 4 consecutive King George’s from 1704 to 1830, so it could have been named after any of them.

North Carolina
North and South Carolina were one colony until 1729, nearly 50 years before the Revolutionary War. It was named in honor of Charles IX of France. The name comes from the Latin word Caroliinus, which comes from the name Carolus, which translates to Charles. Can you imagine a Charlotte, Caroliinus?

Louisiana
This state was named in honor of French King Louis XIV, who loved partying until all hours on Bourbon Street in New Orleans. Ok, so that’s not true. At least the partying part.

Virginia
Alright, you may be seeing a trend here. Many original colonies and Southern States were named after European royalty. That is the case with Virginia, which was named after British Queen Elizabeth I. How did they get Virginia from Elizabeth? Turns out Queen Elizabeth I was known as “The Virgin Queen” and thus the name Virginia. It was named by Sir Walter Raleigh who explored the region in about 1584. Who gave him permission to explore that part of North America? The Virgin Queen.

Tennessee
The Volunteer State got its name from a river the Native Americans called Tanasi and the capital of the Cherokee nation that was known as Tenassee. Sounds like a spell check issue.

Kentucky
No royalty involved here. It is believed Kentucky was derived from one or more of several Native American words. Choose from “prairie”, “meadow”, “land of tomorrow” or “river bottom.” Kentucky was the 15th state to be admitted to the Union. Do you think the capital of Kentucky is Louisville or Lexington? It is actually Frankfort. Frankfort became the capital when it pledged more manpower for the construction of the capital building.

Mississippi
Contrary to popular belief, the state of Mississippi was not named by a five-year-old learning how to spell. It was simply named after the Mississippi River.

How is the state of your insurance? Are you paying too much? How would you know? Contact one of our independent agents for a free, no obligation quote.

Should You Have Family Members Working for You?

Four Paths to Selling a Home

When Working From Home Is Running a Small Businesses

How Do You File a Life Insurance Claim?

Tips for Selling Your Used Car

Adding Appeal and Value to Your Home Through Landscaping & Lawn Care